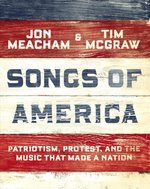 A celebration of American history through the music that helped to shape a nation, by Pulitzer Prize winner Jon Meacham and music superstar Tim McGraw.

Circe France, 1562: Nineteen-year-old Minou Joubert receives an anonymous letter at her father’s bookshop. Sealed with a distinctive family crest, it contains just five words: SHE KNOWS THAT YOU LIVE. But before Minou can decipher the mysterious message, a chance encounter with a young Huguenot convert, Piet Reydon, changes her destiny forever. For Piet has a dangerous mission of his own, and he will need Minou’s help if he is to stay alive

Welcome to the most tumultuous summer of the twentieth century. It’s 1969, and for the Levin family, the times they are a-changing. Every year the children have looked forward to spending the summer at their grandmother’s historic home in downtown Nantucket. But like so much else in America, nothing is the same: Blair, the oldest sister, is marooned in Boston, pregnant with twins and unable to travel. Middle sister Kirby, caught up in the thrilling vortex of civil rights protests and determined to be independent, takes a summer job on Martha’s Vineyard. Only-son Tiger is an infantry soldier, recently deployed to Vietnam. Thirteen-year-old Jessie suddenly feels like an only child, marooned in the house with her out-of-touch grandmother and her worried mother, each of them hiding a troubling secret. As the summer heats up, Ted Kennedy sinks a car in Chappaquiddick, man flies to the moon, and Jessie and her family experience their own dramatic upheavals along with the rest of the country.

Aunt Dimity & the Heart of Gold

It’s almost Christmas in the small English village of Finch–and everyone is sick. Though many of the villagers regretfully decline their invitations to Emma and Derek Harris’s annual Christmas bash, Lori Shepherd has no intention of missing it. When the winter weather takes a turn for the worse, it’s agreed that none of the guests will leave until morning. There’s general merriment as the Christmas party becomes a pajama party–until a car appears in the winding driveway and promptly slides off the slick pavement and into a tree. Matilda “Tilly” Trout–a lost and scatterbrained, middle-aged woman–is mercifully unhurt and invited to stay the night. The next morning, Emma asks her guests if they would like a tour of the Manor–including a secret room she recently discovered. Several guests put forth guesses as to its purpose, but it’s Tilly who correctly identifies the room as a chapel. Placing a palm on one of the ornately-carved panels, Tilly finds a hidden compartment concealing a pile of glittering treasure–including an exquisitely decorated heart made of solid gold. Where did it come from, and why does it look so different from everything else in the chapel? Why didn’t Emma even know about this hidden compartment in her own home until now–and how did Tilly? With Aunt Dimity’s otherworldly help, Tilly’s bewildering store of knowledge, and the village’s collective memory to guide her, Lori sets out to unravel the mystery behind the heart of gold. Lori and Tilly both discover they’ll never spend another holiday alone–and Christmas finally comes to Finch!

When a young writer accepts a job at a university in the remote English countryside, it’s meant to be a fresh start, away from the bustle of London and the scene of a violent assault she is desperate to forget. But despite the distractions of her new life and the demands of single motherhood, her nerves continue to jangle. To make matters worse, during class a vicious debate about violence against women inflames the tensions and mounting rivalries in her creative writing group. When a troubled student starts turning in chapters that blur the lines between fiction and reality, the professor recognizes herself as the main character in his book–and he has written her a horrific fate. Will she be able to stop life imitating art before it’s too late?